What’s the problem with the seaweed in the Caribbean? 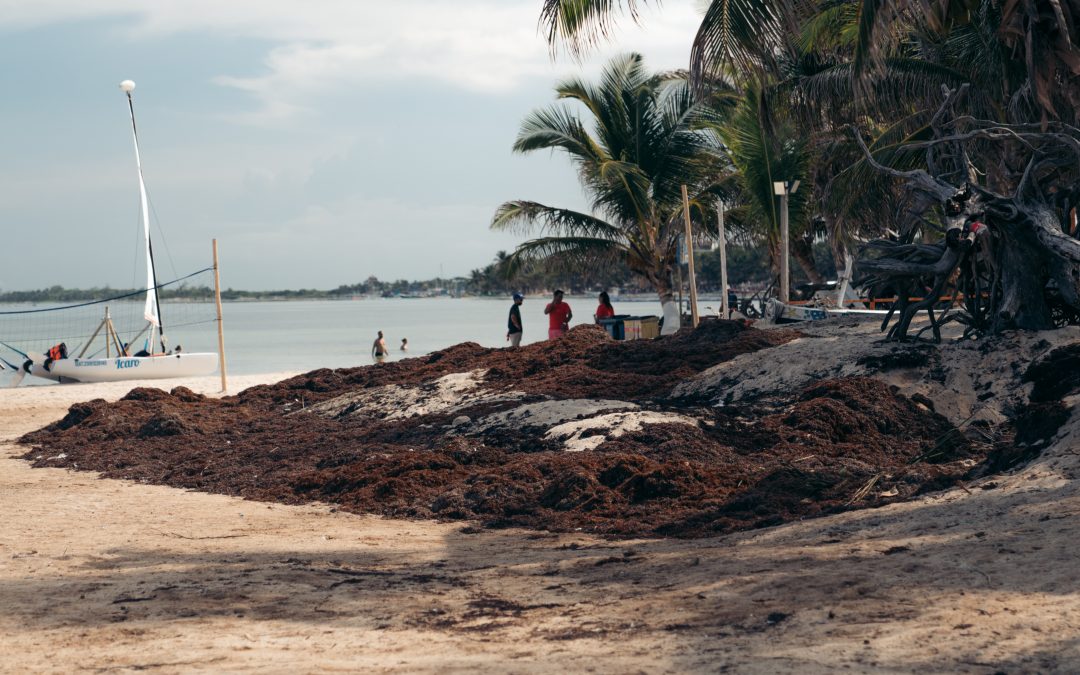 I’m here in Mexico now for almost three weeks and I’m extremely happy to be here. However, the thing that draws my attention right now is the massive piles of smelling seaweed at the beaches. So I did a bit of a research and talked to locals, asking why and how there is such a high amount of algae here.

The brown seaweed at the Caribbean beaches is called Sargassum, belonging to the family of the Sargassacea. Sargassum is commonly found in the tropical and subtropical areas of the world. It produces metabolites like terpenoids, polysaccharides, polyphenols, sargaquinoic acids, sargachromenol, plastoquinones, steroids, glycerides etc., which are thought to possess several therapeutic activities. Structurally it consists a lot of small gas-filled spheres resembling balls, which keep the seaweed afloat. It’s a natural and nutrient habitant for the marine life, for example dorado, sailfish, jacks, amberjacks and turtles.

But why is it then a problem?

Since 2011, huge quantities of Sargassum have washed up on the Caribbean coastlines in Mexico. The seaweed wash up is getting worse and worse and 2021 is one of the worst years according to the data. Once on shore and in the process of decaying it releases compounds which harm the marine life and can cause skin irritations for humans. It prevents sea turtles from laying eggs and from reaching the ocean, and lots of fish are trapped in it and then die. Additionally, it stinks as it decays and a lot of garbage, especially plastic can be found in the algae carpet. So it affects not only the marine life, but the whole ecosystem and tourism as well.

Where does the huge amount of Sargassum come from?

In general, Sargassum is mostly found in warm and tropic oceans. This species on the beaches in the Caribbean is thought to be originated off the coast of South America. The increasing nutrient discharge and sewage from the Amazon river in Brazil, the increasing water temperature and the upwelling in the Eastern Atlantic Ocean create a good habitat for the growth and reproduction of the Sargassum. So three main reasons lead to the massive increase in seaweed washed up on the beaches:

Nutrients found in pollution lead to fertilization of Sargassum

What can be done to reduce the ecological problem?

The hoteliers as well as the locals are in a constant race to remove the seaweed from the beaches, either by hand, wheelbarrows or excavators, which is more than necessary. On the other hand this can also lead to beach erosion and can be very expensive. Further, nets or floating bumpers are used to deflect seaweed. However, these methods are just addressing the effects of the problem but not eliminating the root cause. There must be increased efforts in reducing dumping of nutrients and sewage from countries into the ocean as well as work done to mitigate the ongoing climate change.

Scientist are currently looking for alternative uses of the seaweed, for example using the algae as fertilizer or converting it into compost. Besides that, sea algae can be turned into plant-based leather or the processed algae into soaps, which are then sold to hotels and hospitals (BioMaya in Playa Del Carmen collaborates with local Mayan villages on this project).